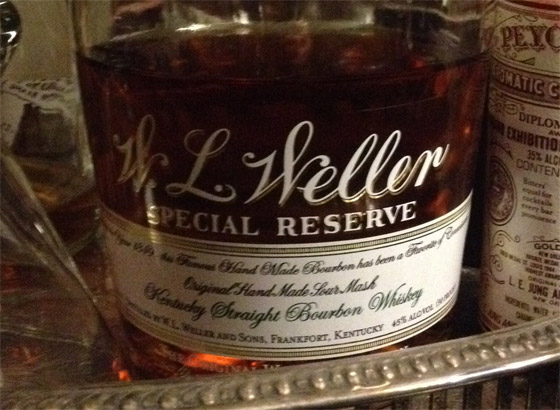 It’s hard to write a review of W. L. Weller without referencing it’s wildly hyped cousin, Pappy Van Winkle. Both are produced by the Buffalo Trace Distillery in Frankfort, Kentucky and both are made from the exact same wheated formula. Unlike Pappy, Weller is pretty easy to find and is sold at very reasonable price.

A wheated bourbon uses corn, wheat, and malt, instead of corn, rye, and malt so it doesn’t have the spiciness found in a most ryed bourbons. Weller was supposedly the first producer to use wheat instead of rye in it’s mashbill. Only a few others, like Maker’s Mark and Van Winkle, use this formula today.

Weller has a good color and some decent notes of honey on the nose. Even without the rye, at 90 proof, it’s not totally mellow. I get a sustaining burn that never gets overpowering. It finishes long with some well-balanced flavors of toasted vanilla, maple, honeysuckle, and hickory smoke.

I typically like to drink bourbon with an ice cube, but Weller is very drinkable neat as well. It’s a good price and has some nice attributes. I would definitely recommend giving Weller a try.