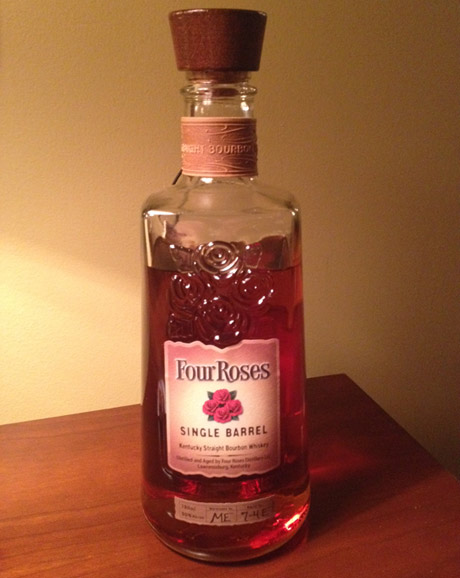 Claiming production back to the 1860s, Four Roses has deep roots in bourbon making. During prohibition, the Frankfort Distilling Company (who owned and produced it at the time), was one of only six distilleries granted permission to produce Bourbon for medicinal purposes. Several different stories have been documented about where the name Four Roses comes from, so I tend to not believe any of them.

Four Roses Single Barrel Bourbon is a well-balanced and wonderfully complex bourbon. It has a bold, dark color and medium body. I get some subtle scents of chocolate and oak from the glass.

At 100 proof, it is very spicy. I found that it started mild, then builded to almost an intense finish right down to my belly before softening out. I was able to pull out hints of honey mixed with cherry and aged apricot through the heat.

The Single Barrel is a very good bourbon and on par with the other labels in the same price range. The burn may not be ideal for everyone, but it’s not unpleasant. The heat actually had a seductive effect for me as it made me want to keep going back for more.