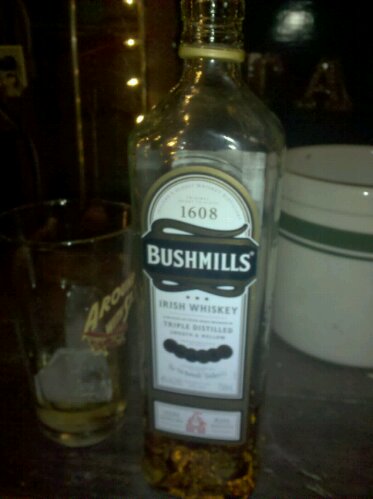 My Irish friend never fails to interject his opinions about the superiority of Irish whiskey whenever the topic of whiskey comes up. I’m adding Bushmills Original Irish Whiskey to this blog as a nod to our brethren across the pond. They’ve been distilling whiskey (or ‘Water of Life’ as they call it) for over 400 years, so I guess they have gotten pretty good at it. This post is also fairly topical since the company’s “Make it 2 Bushmills” contest just wrapped up.

First off, you are not obligated to drink Bushmills neat if you are in the presence of an Irishman. Drinking it with ginger or coke is perfectly acceptable. For the purposes of this review, I added nothing so I could get a gauge on the full taste.

Bushmills (like most Irish whiskey) is distilled 3 times, therefore I found it a slightly milder than American whiskey. On the nose I detected some subtle florals with spice and citrus, but the smells were not overwhelming. Although I would describe the taste as smooth, it’s not shy either and packed a nice punch going down. It had a good burn, with warming flavors of honey and herbs. I couldn’t describe the finish as anything other than crisp. I can almost hear the pub music as I drink it – which I think is a good sign.

Bushmills has a long tradition of making great whiskey and I raise my glass to wish them well for another 400 years.