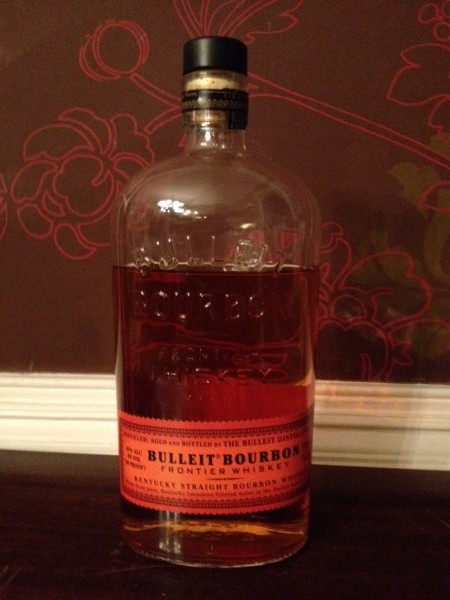 Bulleit Bourbon Frontier Whiskey has a uniqueness and complexity that makes it distinct. This is probably due to its relatively high rye content (at about 28% of the mash). Distilled in Kentucky limestone-filtered water and aged in charred American oak barrels, Bulleit (90 proof) claims it ages the bourbon “until it is ready” and obvious swipe at the pretentious “how-old-is-this” crowd. The brand added a straight-up rye whiskey to its arsenal in 2011.

The bottle itself is fairly unique itself compared to many others on the shelf. I love the way the old medicine bottle and raised lettering conveys a nostalgic note which is punctuated with an understated label placed slightly askew. It’s so understated that if you were not familiar with Bulleit, you may have to ask the guy behind the counter where they keep it.

Bulleit has a rich amber color in the glass and a warming, smokey scent. Without ice, I experienced a good burn from the front to the back. It starts out strong and spicy giving way to flavors of brown sugar, wild flowers, and vanilla with very long flavorful finish waiting at the end. I added a few ice cubes which mellowed the burn slightly without dulling the richness of the flavors.

There is a depth and complexity in Bulleit that I find appealing. I think this is one to keep around for when you’re in the mood for something slightly different.